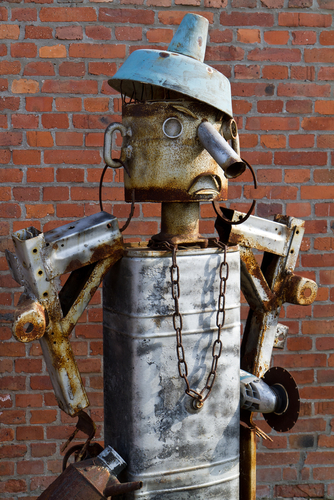 Robots are more than just factory workers. These days, they are adding diverse creative pursuits like computer-aided performance art, kinetic sculpture and automated installations to their ever-expanding digital resumes. Robotic art has been defined as “any artwork that employs some form of robotic or automated technology,” but this barely touches on the sophistication and creativity often involved.

All robots are hardwired with a certain amount of computer code, which they use to make decisions and navigate their environments. Playing off this, robotic artists utilize programming together with actuators, sensors and computers to enable their mechanical and electrical creations to become interactive, entertaining and hopefully thought-provoking. For now, at least, these innovative projects are still ultimately controlled by humans – but who knows what the future holds?

British kinetic sculptor Giles Walker has been described as a “scrap artist who has been transforming the industrial waste of contemporary society into fully functional robotic systems for over 20 years.” One of Walker’s most well-known robotic creations is his 2007 piece, Peepshow, which featured a pair of pole-dancing robots with CCTV cameras for heads and made its debut at the U.K.’s Glastonbury festival. Walker points out that we’re “all living in a peepshow… continually being watched by mechanical Peeping Toms on every street corner.” With this Orwellian-inspired take on modern surveillance and voyeurism in mind, Walker pondered whether he could lend sex appeal to a CCTV camera by employing rudimentary mechanics. To find out, he used V12 windscreen wiper motors, a computer and a DMX program, thus bringing his gyrating creations to life. A turn-on? Perhaps not, but it certainly is provocative.

“Like many of my generation, I grew up suckling on a cathode ray tube and bathing in radio waves,” U.K.-born installation artist Peter William Holden has explained. Enthused by early ‘80s PCs, Holden uses computers and mechanical components to develop “mandala-like” moving projects that combine cinema and craftsmanship. Holden’s incredible 2012 “brutalist robotic” project, Vicious Circle, took its cues from the Industrial Revolution and aims to convey the dualist nature of technology and the power humans have to influence its course. Set to Russian composer Sergei Prokofiev’s “Dance of the Knights” and a sequence of mechanical clicks, the computer-run installation involves eight headless robot torsos whose arms are articulated in a synchronized choreographic sequence straight out of a Kraftwerk music video. It’s hauntingly beautiful stuff.

Controversial Sarasota, Florida-born performance artist Mark Pauline’s post-apocalyptic looking robot creations have been wowing onlookers for decades. In 1978 Pauline established Survival Research Labs (SRL), a company dedicated to “dangerous and disturbing mechanical presentations.” SRL – which has been credited with inspiring TV shows like Robot Wars and BattleBots – aims to reshape the form and purpose of robotics as we know it. One such SRL creation is the Big Arm, which has been accurately described as a combination dinosaur/backhoe. Referred to simply as a “20-foot-long robot” by the New York Times in 1988, it is basically a giant mechanical claw that is operated via a remote, customized computer-based control system and that pulls itself forward with the help of gas-fueled hydraulics.

Celebrated American robotic bio-artist Ken Rinaldo describes himself as “an artist and theorist who creates interactive multimedia installations that blur the boundaries between the organic and inorganic.” Rinaldo studied computer science at California’s Cañada College and currently oversees the Art & Technology curriculum at Ohio State University in Columbus. Working with previous students Ross Baldwin and Matt Howard, he initially unveiled the 2006 project dubbed Autotelematic Spider Bots in the U.K. The piece involved ten arachnid creations capable of engaging with an audience with the help of sensors. The bizarre robots further combined elements of the bat, bird and ant, with website Art and Electronic Media labeling them “chimeras.” The spiders walk with charm, communicate by way of bird sounds and can turn on cell phones, while long- and short-distance “eyes” allow for adaptive behavior.

In 2001 German artist collective Robotlab turned the tables on a pair of KUKA industrial robots, transforming the unlikely duo into a dance floor-filling interactive installation entitled juke_bots. Robotlab describes its mission as exploring “the relationship between man and machine by means of installations” and public exhibitions. In this case, the sleek robotic movers – which would normally be seen on an assembly line – have been reprogrammed to mimic vinyl-scratching techniques and even to manipulate song tempos. The bots’ actions are so precise that the records never even touch the turntable, only its needle, while the noise of the moving mechanical parts becomes enmeshed in the overall soundtrack. Ominously, Robotlab reckons that “robots will play a significant role in future societies and invade more and more human domains.”

Canadian creative and Concordia University electronic arts professor Bill Vorn has been dabbling in robotic art and exploring “the aesthetics of artificial behaviors” since the early ‘90s. His interactive project known as Hysterical Machines began in 2002 with one eight-armed prototype, dubbed the Prehysterical Machine, and had grown into a moodily-lit collection of 11 partly-suspended robots by 2006 – when it was publicly unveiled at STRP in the Netherlands. According to Vorn, the machines boast an “autonomous nervous system” and a “sensing system” that react to their environments and onlookers based on how much stimulation they get. Through the project, Vorn intended “to induce empathy… towards characters which are nothing more than articulated metal structures.” Hysterical Machines was most recently displayed in summer 2014 in Gdansk, Poland.

In 2007 eccentric Cypriot-Australian performance artist Stelarc notoriously had a functioning “cell-cultivated” ear grafted to his arm. The project was yet another bizarre demonstration of the artist’s ongoing quest to prove that the body is “obsolete.” Stelarc’s performances also frequently integrate robotics. His 1999 project, Exoskeleton, consisted of six pneumatically-powered appendages which when worn by the artist essentially function as a kind of crawling machine. The creation also featured an enlarged left arm with 11 points of articulation, plus a functioning hand. Using elements of computer simulation, programming and electronics, Exoskeleton is controlled by its operator’s arms, which “guide the choreography of the locomotor’s movements and thus compose the cacophony of pneumatic and mechanical and sensor modulated sounds.” Originally created in Hamburg, Germany, the device was seen as recently as 2013 at STRP Biennial in the Netherlands.

Toronto-based interactive artist Morgan Rauscher’s 2009 project, Zeugen, was made up of 32 human-cast faces rigged with a robotic device for face tracking. The idea behind the interactive work is the notion of seeing and being seen. The piece has the look of a creepy robotic painting whose 64 eyes follow viewers around the room. Rauscher utilized body casting, fine art, mechatronics and robotics to breathe life into his mechanical observers. Volunteers were used to cast the faces, with “stereotypical identifiers of race, age and gender” removed through a “rigorous post-casting process.” And if that weren’t anthropomorphically eerie enough, the faces’ artificial eyelids spontaneously lift when approached, “starting an immersive and reflexive interactive experience.” The project is currently in its third phase of development while Rauscher continues work at the Hexagram-Concordia research center in Montreal.

New Mexico-born artist and Amorphic Robot Works (ARW) founder/artistic director Chico MacMurtrie’s The Robotic Church installation was first presented at ARW’s Brooklyn studio in 2013. MacMurtrie set up ARW in 1991, and according to The New York Times, his robotic creations are “designed to play music” and “evoke some thought about humanity.” The Robotic Church features 35 pneumatic sculptures that measure from one to 15 feet and are controlled via a computer. This existing collection of sculptures can play independently or en masse, and although based in computer science, these makeshift robots possess at least one human-like trait: they act as a conduit for air, actuating their “inner biology.” Describing the work, the Times wrote, “One robot… plucks its own stringed body, while others hop around on the floor in a manner not unlike children playing leapfrog.”

Kinetic artist Christian Ristow earned his robotic art sculpting stripes at Petaluma, California-based Survival Research Laboratories in the ‘90s. Inspired by creators like H.R. Giger, Ristow soon began fashioning his own techno-human inventions and went on to establish his “alter-ego,” Robochrist Industries, in Los Angeles. Ristow’s work has been featured in Hollywood films and demoed at major music festivals. His most striking creation is arguably his 2008 piece, the Hand of Man, which was financially backed by Burning Man in Northern Nevada. The massive sculpture is essentially a 26-foot robotic hand and forearm that can lift and squash a motor vehicle. The hand is powered by a diesel engine, a 12-volt power unit and a salvaged airplane cargo loader motor, and it’s operated using an easy-to-use glove controller that “democratizes the crushing power.”